Last week the technical team setup a number of meetings with suppliers to look at the communication options we can integrate into our core school platform.

Our main line of communication is and remains email. However, we wanted to scale that up to include more options for school to home communication. Options that fit with apps and technologies already installed on users phones.

You are correct in thinking that we previously had a suit of mobile apps and associated technology that allowed push notifications to be sent directly from the website to parents. The issue is simply that the platform was largely unused making it commercially unviable to continue to support.

This is a trend seen beyond our context. The rise in hybrid apps (Mobile Apps that use web based technology to effectively replicate a website in app format) are on the Apple and Google hit lists.

Apple claim to review apps in 24hrs and that the success ratio of approval is only 60%.

While that sounds high, from first hand experience I can say that it is not. Our core app framework ran the exact same code base for all schools. We would submit multiple apps at any given time and we got to around an 80% failure rate and 100% approval rate on appeal. This became a time consuming and tedious task.

The other problem I have with mobile apps (even ours) is that the predominant feature is messaging. I really don’t need another app taking up my phones memory and storage when I have another five or six from established companies already sitting there.

That led us to looking at the problem from an alternate perspective.

What are we trying to achieve?

It is pretty simple really. Increased communication channels that can be selected by a parent based on their preference from our iTCHYROBOT Parent Dashboard.

What channels are we looking at?

Again, that is simple the biggest!

WhatsApp we have largely discounted. Unfortunately having spoken to a number of providers the costs per year soon exceed £10,000 which is horrendous and makes bringing SMS back into the picture as a very affordable alternative.

This will largely be a communications app if we head back down this route. It will be integrated within our websites for ease of use and updating.

It will be available on the Google and Apple Stores.

It will integrate appointment features for parents evenings.

But really it would be for push messaging from school to parent.

The app would be centrally branded as Itchyrobot.

Apps have their place but the bad press they have received of late has made me doubt whether the other trusted channels is not a better option. Wouldn’t the friction of parents usage be significantly reduced if you are asking them to use an app that is already installed on their phone.

You will no doubt have seen comments on social media related to Google and Apple stealthily installing a Covid-19 tracking app on your phone. Needless to say it is utter rubbish and would be against so many of their own privacy policies and laws that even with a pandemic it would not be worth it.

What the corporations in the last update have installed is a suite of additional tools for developers to use to build Covid-19 tracking apps that can share unique phone keys via Bluetooth. It could be seen as a relaxation of the tight privacy rules in a time of need. Who knows. So there will be a raft of new apps spun up with tracking features. The option to enable the tracking remains firmly in the hands of the phone owner.

Less impressively is the rise of apps that expose the accessibility features available. By installing and activating apps you effectively give the app permission to access your phone features.

The recent app to exploit Android’s accessibility features is an app called Defensor ID. The app when installed requests that the user activate accessibility services”. If you enable this permission it allows the app to read and text displayed in any app on a device. The nefarious element is then sending that data to the hackers.

What this means in real terms is that anything on your screen is no longer private. Be that bank details, passwords, multi-factor authentication codes or text messages.

Defensor ID is not the only such app that has caught the attention of Google. A host of photo effects (selfie) apps appeared in rapid succession over the last few months which had various issues reported. The most notable was redirecting websites or showing random adverts. More of an annoying Malware than full on data stealing like Defensor ID.

Were does that leave us with apps?

They are here to stay. But what we need to focus on is giving people the messages quickly and easily in their preferred format.

Watch this space and it would be great to have feedback on communication channels we should consider and whether an App is still considered useful or whether like in business it is a fad that as all but passed.

If you have any opinions on the above or would like to have a hand in shaping the upcoming communications platform please get in touch with one of the team.

Delighted that we have been shortlisted for the #TeesTechAwards2020 in the Tech for Good category for our @ClevelandMRT product. 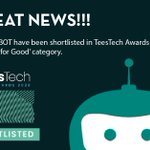